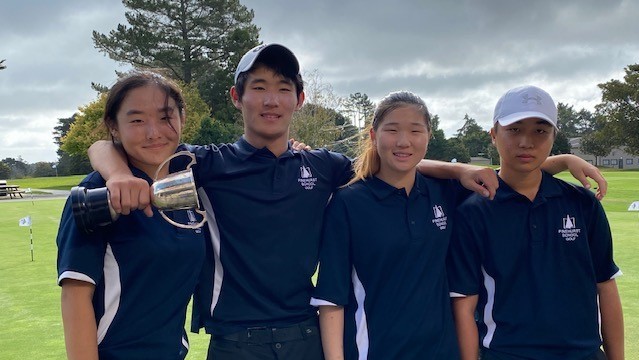 On paper, the Pinehurst team were not expected to win. Macleans College are former national champions and their current team fields some of New Zealand’s best players. Despite this, Pinehurst won the match by two strokes to take the title for 2021.

The team’s manager and teacher in charge, Elizabeth Daly says “All our players deserve a special mention because their team attitude and their motivation to win for the team and for Pinehurst shone through.”

The top group of Nicole Choi & Yeonsoo Son (Pinehurst) and Jaeseung Na & Vivian Lu (Macleans) played a round of golf that would make professional players happy. Nicole finished the round 6 under par and Yeonsoo 5 under par. This was too much for the Macleans players who finished 3 under and 1 under. There were only two bogeys total in the whole group, and both Nicole and Yeonsoo had no bogeys during the entire 18 holes.

Jaewoo Son and Towa Usui played in the second group. Both players were extremely calm and focused with Jaewoo teeing off consistently throughout and Towa sinking some putts that were missable to say the least. Towa said he had practised some putting the night before and this clearly paid off for the Pinehurst team.

This is the second time that Pinehurst has won the trophy and the joy of winning this competition in no way diminishes. The top team will now compete in one more tournament to secure a position at the New Zealand Secondary School Championships later this year. 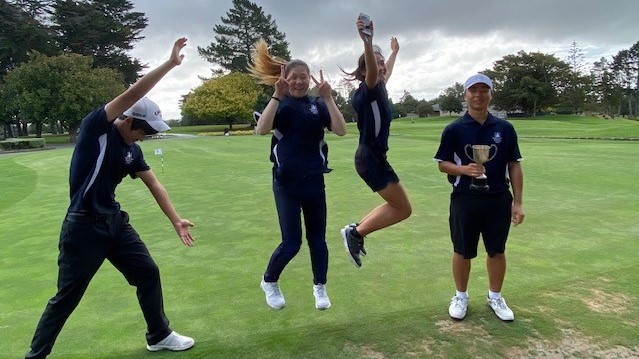 Girls Rugby League is CANCELLED Today due to the weather. Please contact us with any questions school.sport@collegesport.co.nz or 09 845 8496
20 May 2022

The Girls Lacrosse Championships will now be held on Thursday 18 August. Venue remains unchanged and will still take place at Avondale Racecourse.