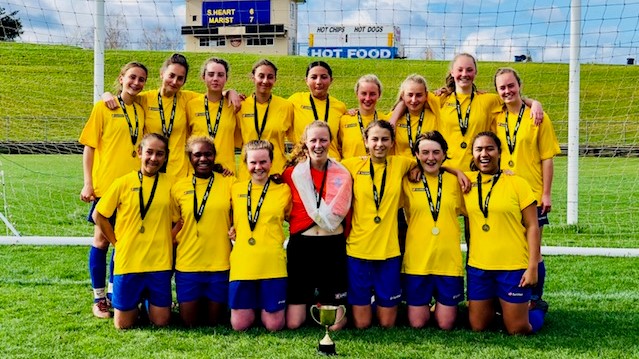 The Marist College 1st XI Football team ended the season in style by claiming the prestigious Maurice Hulme Trophy in Rotorua, and with it, keeping their perfect record intact this season. This team has had a remarkable year, remaining unbeaten all season (a run of 21 games) and along the way claiming the Senior A1 title, the APC Division 2 title and the Maurice Hulme Trophy.

The team is coached by John Vujnovich & Neven Grgicevich who have coached at the school for the past three years however it was their first year in charge of the First XI. It was a natural progression for both coaches as their daughters made the transition from the Juniors to the First XI.

“The team have been fantastic all season and have really embraced our style of coaching from the outset” said John Vujnovich. “We believe the girls must be having fun first and foremost, and then the team environment can be moulded to suit from there. Trust and respect builds a solid foundation and once that’s developed team members can focus on having fun and playing the game they love with their teammates. It wasn’t hard with this group to be fair – we are like one big happy family!”

“We are a really young team and only have the one school leaver in 2018 although it’s a pivotal position being our goal-keeper.” We under no illusion that next year is going to be tough however the girls are up for the challenge and are already relishing the opportunity.”

The final itself against Sacred Heart (Hamilton) was one to remember. It was the perfect start for Marist after Kitty Jacob headed home a Sophie Culpan cross in the first 5 mins of the game to go 1-0 up at the break. For 59 minutes Marist controlled the game, dominated possession and had one hand on the trophy – the organisers had even set up the awards table on the side-line. This was hurriedly dismantled as Sacred Heart equalised with the last kick of the game – a stunning free-kick in the 60th minute. In extra time, a spectacular individual goal from Sophie Culpan gave Marist a 2-1 lead, which was short-lived, as another long-range shot from Sacred Heart levelled it up at 2-2. A frantic last five minutes saw Marist goal-keeper Emily Steiner pull off a couple of excellent saves to see the game progress to a penalty shootout. Marist calmly scored all five penalties, as Sacred Heart missed just the one, to give Marist an historic victory and the Maurice Hulme trophy.

A special mention goes to Emily Steiner who had a remarkable week – the final being her very last game for Marist College. Not only did Emily pull off some stunning saves, the penalty shootout against Avondale will forever be remembered for an incredible save she made to keep Marist in the tournament. Emily also broke her arm in the penalty shootout of the final however still took her place in the middle of the goal for one last penalty save attempt for her beloved Marist. A true champion!

“We would like to thank the entire team for their dedication, commitment and character that they have shown throughout the season. They have been an absolute joy to coach! We would also like to thank Annie Jacob and Mrs Dale who kept the team in fine form by making sure they were as best prepared as possible throughout the week. Thanks also to all of our wonderful supporters who supported us throughout the year and for those that made the trip down to Rotorua.” – John Vujnoich