She may only be 14 years old, but ACG Parnell College’s Rhea Prasad is already a rising star on the netball court.

Not only does she play netball at an Under 18 club level for the College Rifles, but she’s also the newest – and youngest – member of ACG Parnell College’s Senior A team. Her next goal? Helping Senior A get into the Premier Grade!

“I’ve always wanted to play at the premier level for netball, and I’m hoping to get there by Year 11,” says Rhea, who has been described by her coach as ‘a motivated player who is always driven to succeed’.

After beginning the 2020 season as the Year 9 team’s star shooter, Rhea was given the opportunity to fill in for a Senior A game. She jumped at it – and impressed the coach so much she was offered a permanent spot on the team.

“I was very surprised, but so happy when I was asked to join the Senior A team. It has been one of my greatest netball highlights so far along with getting into the College Rifles. I’d been working to get into the club for two years!

“By playing at a higher level, I hope to improve my skills and develop my game tactics.” 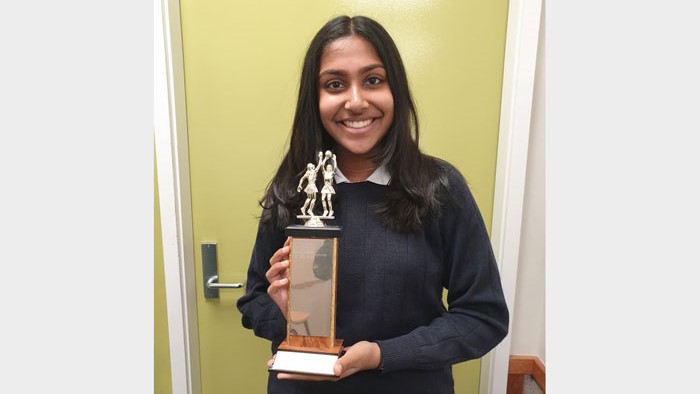 She’s already well on her way, having just won the ACG Parnell College Year 9/10 Netball All Rounder trophy for 2020. But it’s not the awards that fuel Rhea’s passion for the game.

“I love socialising with my teammates and working together with them to win games. I also love that I can showcase my skills and learn new ones.”

With both club and school netball taking up several hours of training and game time each week, it’s hard to imagine this sporty teen would have time for much else. But you’d be surprised.

“I play for ACG Parnell College’s First XI girls football team and their First XI girls cricket team. I’m also a class representative on the Student Council, I often help out at Open Days, and earlier this year I helped to coach and umpire for a one-day netball tournament. Next year I hope to progress further with coaching and umpiring.”

That’s a lot to juggle for anyone, but Rhea is also determined to maintain her academic focus and not let her grades or coursework slip.

“Sometimes it’s a bit of a challenge to balance my studying and sports, but I usually manage quite well.”