The Schick Championships (the Secondary Schools National Basketball Championships) tip off on Monday at the Central Energy Trust Arena, Palmerston North. The pools are set and the draw is out, with some intriguing match-ups in both the A* and AA* competitions, that will be any basketball fan’s delight if they get down to the Schick Champs early next week.

With 268 games featuring 69 teams and over 800 players, the 50 years-old Schick National Championships promises to be another memorable basketball festival.

The AA Boy’s defending champions Rosmini College find themselves in Pool A, titled by many as the ‘Pool of Death’. To retain the Doug Harford Memorial Trophy Rosmini will have to overcome Wellington’s Premier competition champions Rongotai College and Zone 2 qualifiers champions Hamilton Boys High.

If that wasn’t enough, Mt Albert Grammar School (MAGS) are also in the pool. Beset by injuries MAGS finished seventh in the Zone 1 Qualifiers but it shouldn’t be forgotten that they were the regular season champions in the Auckland Premier competition and finished third at the Schick Champs last year.

Five times champions Westlake Boys High School appear in Pool B along with the runners-up from the qualifiers Zone 1 (St Kentigern College), Zone 2 (St John’s College – crowned Waikato Champions last week) and Zone 4 (Shirley Boys High School). It would also be unwise to discount Rotorua Boys High School who made a good showing recently on their trip north to take on some Auckland heavy hitters.

Rangitoto College, Schick Champions in 2015 and 2016, top Pool C where they will be tested by Auckland Grammar School who they beat 104-91 in their Zone 1 3rd/4th play-off fixture. Palmerston North Boys High School, silver medalists in 2016, and Middleton Grange will also be looking for a top three spot.

Palmerston North finished third at the Zone 3 qualifiers and Middleton Grange, although seeded fourth, ran Cashmere High School close in the semi-finals of the Thomson Trophy in Christchurch last month. Otago Boys High School, the only South Island AA Boys champions since Nelson College in 2000, are also in Pool C.

However Waimea College and St Patrick’s College Kilbirnie, who were finalists in Wellington’s Premier competition, should not be overlooked. Tauranga Boys College and Macleans College, Senior A champions from Auckland round out the pool. 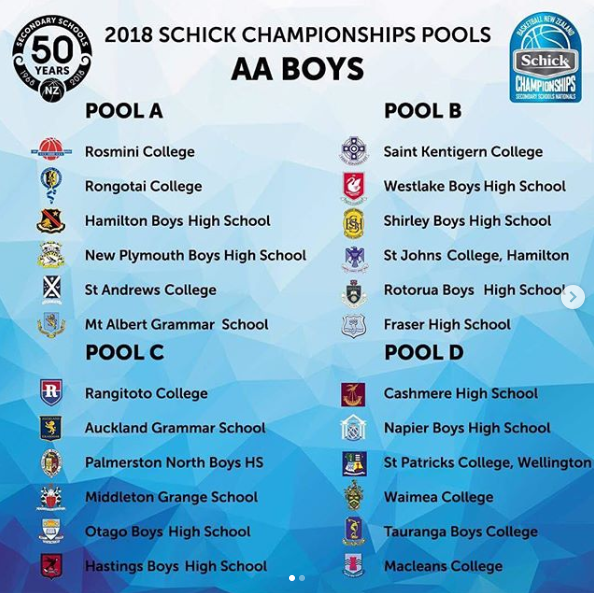 There are some intriguing lineups as we look forward to seeing who will lift the historical C.A. Clarke and Stone Trophy and claim the Schick AA Girls Championship.

The talented trio of Hutt Valley High School, St Andrew’s College and St Peter’s School, Cambridge are all in Pool B.

Hutt Valley won the Wellington Premier competition and also finished runners-up in Zone 3. St Andrew’s are the Zone 4 and Canterbury champions and St Peter’s have contested the last three finals, winning in 2015 and 2016.

St Peter’s chose something of a different path this year in their preparations as they headed to the Gold Coast for some games in late August.

Otago Girls, third in Zone 4, will be looking to upset one of the big three to gain a shot at a top eight finish.

In Pool A it is Zone 3 winners Sacred Heart Girls College, New Plymouth that are seeded number one.

Christchurch Girls High School, winners in 2013, will be looking to progress, as will Westlake Girls High School who have been one of the better performing sides in Auckland this season. Rangitoto College has had some good results in the last month and should also be competitive.

Mt Albert Grammar School head Pool C and should be full of confidence after claiming double success in winning Zone 1 and the Auckland Premier Grade. However this is a deep pool with all six teams capable of beating each other on their day.

Rangi Ruru College were runners-up in both the Canterbury Whelan Trophy Final and the Zone 4 Final, Rotorua Girls High School finished third in Zone 2 and Queen Margaret College claimed the runner-up spot in the Wellington Premier competition. Those teams will ignore the chances of Massey High School and St Mary’s College, Ponsonby at their peril.

In Pool D Auckland Girls Grammar School have only lost two games all season (the Zone 1 and Auckland Premier Grand Finals) whilst Hamilton Girls are coming off the double of Zone 2 and Waikato titles.

Also in the pool are a rejuvenated Napier Girls High School that after finishing third in Zone 3 enjoyed some success in recent hit-outs against top Auckland teams. Fraser High School finished fourth in Zone 2 and will also be looking to claim a top three spot in the section. 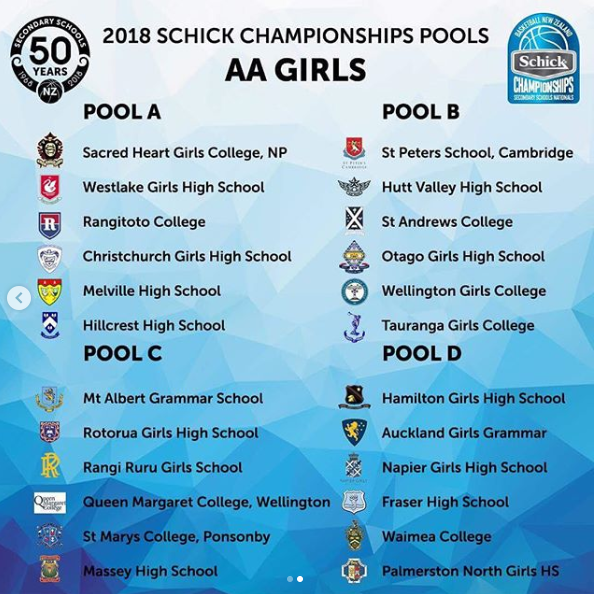